Are you worried about the security of the data you transport over the internet? Oh well, you should be. The use of the internet is growing at a rapid pace, and so is the threat to your information which is being sent from one device to another. With the hackers becoming more and more advanced by each passing moment, our information is no longer safe over the internet. There is not much use of the internet if we are not able to send the data someone needs or receive it if we require it. Hence, the server and client both need to work on their security.

The best way to protect your data while transmitting is to encrypt it. The encrypted text is hard to read and keeps your information safe from man in the middle (MITM) attacks. This makes it a reliable mechanism for your data to be communicated.

How does encryption work?

Though humans have been using simple encryption techniques for ages, computers make it easy to adopt more sophisticated coding to hide the data from the peering eyes of someone who may be intruding. It is the process where the sent text or information is converted into an encrypted form called “ciphertext.” To unlock a particular message, both the server and the client use a ‘key’ which is a combination of algorithms which decrypts the data. In simple words, the readable text is scrambled and can only be deciphered by the person who has the decryption key.

This protects the confidentiality of the information which is sent through the internet to someone else.

The encryption is done in 2 ways:

As the name suggests, symmetric encryption refers to encrypting and decrypting data with the same key on both ends. This whole mechanism runs on secretive sharing of a single key, i.e., the key needs to be shared in a secure manner, which sometimes hard to achieve.

Symmetric encryption is an old and simple technique to cipher and deciphers data. It is fast and is mostly used for bulk information transmission. But it also has some side effects. For instance, without active key rotation or improper maintenance of the key, it can fall into the wrong hands and result in the loss of your data.

Therefore, it is used in combination with asymmetric encryption. 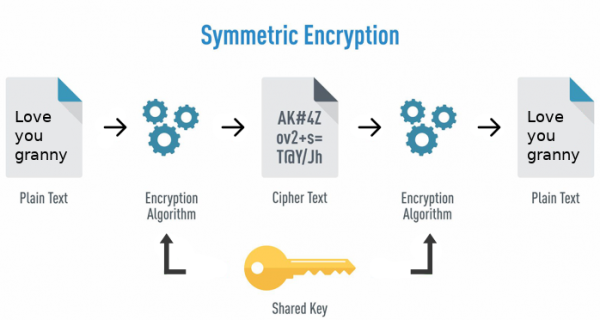 It is also called Asymmetric cryptography, or public-key cryptography. Unlike the symmetric encryption, asymmetric encryption has two keys – one private and one public. The first key, i.e., the public key, stays with the server through which the readable data is encrypted for protection. To decrypt the information, the client holds the second key, i.e., the private key, which has been provided. Both the public and private keys are related, but a private key cannot be derived from a public key.

Asymmetric encryption is relatively new and slower than symmetric encryption but is more effective in providing better security. This method has a higher computation burden and is used mostly used to establish a secure channel over the “not so secure” medium like the world wide web.

Find here the key difference between Symmetric VS asymmetric encryption of data transfer.

In symmetric encryption, the ciphertext size is usually either the same or smaller than the plain original information.

In asymmetric encryption, the size of the ciphertext is typically either the same or more significant than the original data.

Also Read: 7 Cybersecurity Steps You Should Already Be Taking.

Symmetric Vs Asymmetric Encryption – Which One Is More Secure?

The cryptographic technology is advancing, and new algorithms are still being developed. We cannot conclude any one method to be better than the other as it depends on the use case. However, the latest techniques and schemes are relatively better when it comes to encryption. The type of encryption to be used must be chosen according to the task at hand. If you want to send or receive bulk data, symmetric encryption will be more helpful as it is faster. On the other hand, if you need a more secure method, asymmetric encryption would be a better option.

In addition to this, for a more secure transfer of data, the world wide web, aka the internet, uses both symmetric and asymmetric encryption. It is done by adopting a secure socket layer (SSL) for HTTPS (HyperText Transfer Protocol Secure) transport.

How Does SSL Use Encryption?

Also Read: What Are Honeypots? Definition and Security.

Do you know who creates the SSL certificates we see to ensure our security on some website? Certificate authorities are the ones who have been entrusted to provide digital certificates to the sites who wish to obtain an SSL certificate to protect data interchange between the clients and their servers. These organizations act as a responsible third party who is trusted by everyone. These authorities ensure that safe and encrypted connections are created between two parties. This ensures that no malware or hacker steals your personal information during transmission.

Getting an SSL certificate is one of the best ways to secure your server and protect user information.

This article must have provided you all the information you needed regarding symmetric and asymmetric encryption, including their difference. Both have important roles to play in data communication. Most social media and other communication applications like WhatsApp also use asymmetric coding in their end-to-end encryption. Now that you have all the information you need regarding encryption go ahead, and adopt the right mechanism to secure your data transfer path.

How To Convert An Image Into Text File Or Document?

What Are Honeypots? Definition and Security

ABOUT US
CodeItBro is a hub of Python programming tutorials. We also cover data science and everything else required to help you become a better programmer.
Contact us: codeitbro@gmail.com
FOLLOW US
© CodeItBro - All rights reserved