Do you love playing Maths-based board games? If yes, in this blog, I will share a fantastic game app that you can play with your friends to have a good time.

Dodeo Game is an online multiplayer board game that enhances the player’s logical reasoning ability as it involves a bit of Maths.

Usually, board games are played with four-sided dices, but you have multiple polyhedral dices to play with.

The game concept is simple, but it requires a bit of a learning curve. At first, you may find it confusing to play as the app UI/UX is not up to the mark. However, if you are ready to bear with the gameplay’s initial hiccups, I am sure you will love this game.

With that said, let’s now see how you can play the Dodeo game with your friends.

How to play Dodeo Game

Dodeo Game is available for Android OS, and in case you don’t want to install any app, you can also play it online here.

Two players can play the Dodeo Game, and here are the rules for it. The trickier part is only to understand how someone is called a winner in the game. So, pay close attention if you want to defeat your friends.

The interface of the app looks similar, as shown in the screenshot below. There are 5 columns for each type of dice. 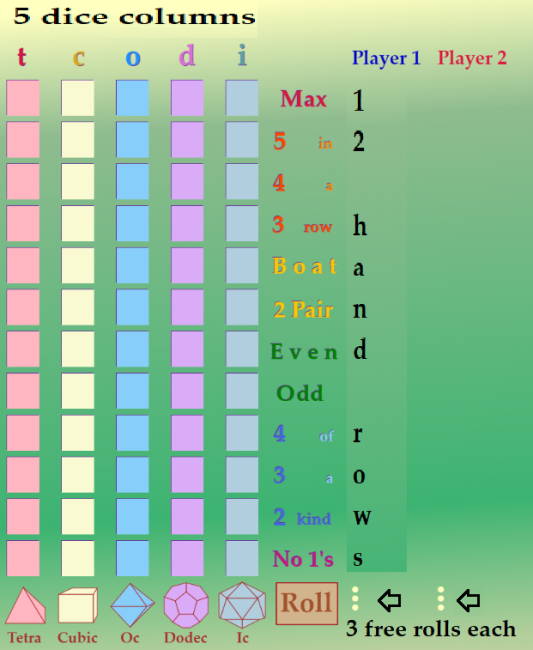 1. The game is played on a 5×12 grid consisting of 5 dice-columns and 12 hand-rows. Each player gets 6 turns, and the player with a higher roll starts the game.

2. Now, each player gets 2 rolls per turn and 3 free-rolls per game.

3. Players can play the numbers of each dice in any unoccupied row of the corresponding column.

4. You own a row when you occupy at least 3 spaces. Whenever you own a row, you will earn the total of all dice in each of their rows.

5. Whenever you will make a hand, you will earn a 50-points bonus.

6. During a turn, a player, can re-roll any unplayed dice and move the earlier played dices to another hand-row.

8. The player with the higher score wins the game.

Dodec Game is unique and interesting. After spending some time understanding how to play this game, I really enjoyed it with my friends. The only downside is that it should be more intuitive to users with a better UI/UX and sound effects.

Do check out this game and let me know if you like it or not in the comments section. Also, please share it with your friends on social media.