Here you will find the two best Spongebob voice to text speech generator websites. Using these Spongebob voice generators, you can make Spongebob say anything you want. You have to specify a message, and these tools will generate Spongebob’s voice based on that.

The best part is that the generated voice sounds very similar to Spongebob, and it is tough to spot the real difference. Not just Spongebob but you will be able to create voices for other characters such as Squidward, Patrick Star, Sandy Cheeks, etc.

You should check out this app if you want to create funny Spongebob deep fake videos.

It uses deep fake technology to create sounds similar to Spongebob, and the difference is very subtle from the original voice.

Step 1: Visit the website using the link above and select the Cartoons option under the Category/Language section. After that, you will see another dropdown on the screen.

Select the SpongeBob SquarePants option from this dropdown, as shown in the screenshot below. 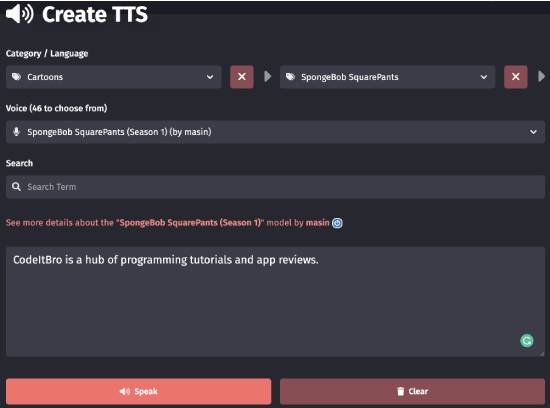 Step 2: Once you have specified the message, click on the Speak button, and FakeYou will generate a Spongebob voice that you can either listen to online or download to your device as a WAV file.

Click on the three-dot menu and choose the Download option. After that, you can save the Spongebob text-to-speech WAV file on your PC.

Uberduck is another fantastic Spongebob voice to text speech generator. The best part is that it allows you to create voices for other characters, such as Squidward, Plankton, and Patrick. The only limitation is that you must create an account to use this free online tool. 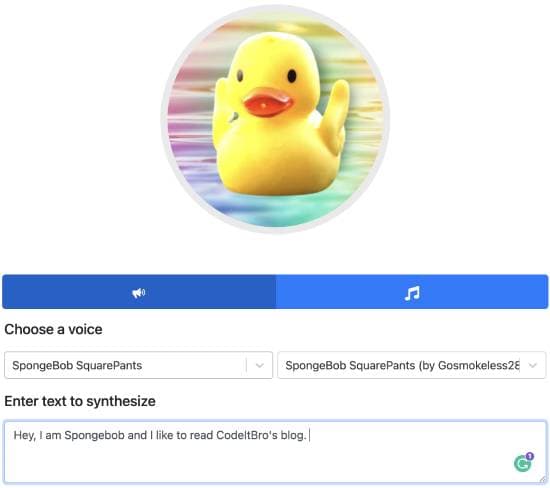 Step 2: Specify your message or text to synthesize in the text area after selecting Spongebob voice.

Step 3: In this final step, you must click on the Synthesize button, and this online tool will generate a Spongebob voice with your specified message.

Unlike Vocodes, Uberduck doesn’t provide the option to generate a permalink to your generated Spongebob voice. However, you can choose to play it online and download it as a WAV file to your device.

15.ai is the easiest text-to-speech website. It has a straightforward user interface. The user enters the text and presses “Enter” or “Create” to convert the text to speech. It converts in seconds. But now it has stopped working on getting ready to fix some bugs.

Voxbox is a combination voice generator and voice recorder with not only SpongeBob’s text-to-speech capability but also 11 world languages, over 25 national accents, and over 100 categorical voices. You can use VoxBox for any purpose as a robust AI voiceover generator. 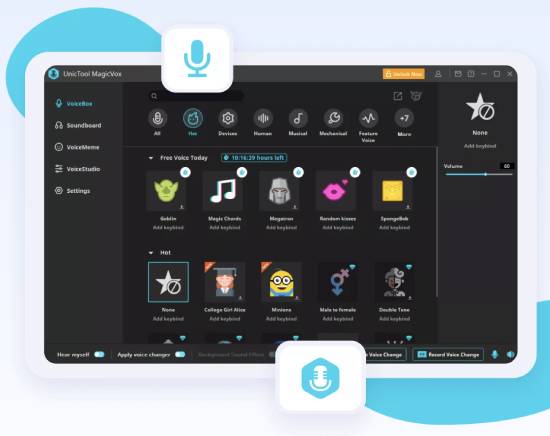 UnicTool MagicVox is one of the best tools to change voice on PC. It has many features that make it stand out from the crowd of other tools.

It is voice changer software for pc to change voice in a snap. It has a wide variety of fun and hilarious effects to apply to your voice, from Darth Vader to SpongeBob. You can also use MagicVox to record or playback audio.

In this blog, you explored the two best Spongebob voice to text speech generator websites. Using any web application, you can make Spongebob speak anything you want by specifying a message. Do check out these excellent websites to create funny Spongebob memes or stories and have fun :)