Installing a reliable note-taking app on your iPad is a must if you want to stay productive on the go. The best note-taking apps for iPad will sync your notes across all your phones, and these apps come with many useful features. And many of these are intended for specific purposes, so it isn’t easy to choose the best one.

So if you’re looking for the ultimate iPad note-taking app, keep reading to learn more about the top 14 options.

Below is a list of 15 note-taking apps available for iPad, carefully selected by weighing features, uses, costs, and many other essential aspects.

Notability is perfected for apple pencils and iPads. The app offers some great features that make perfect sense. Some include voice recording and syncing with your written text, a favorite toolbar for tools, handwriting recognition, and math conversion.

However, math conversion is unavailable to non-premium users, with a limitation on notes and no cloud syncing. It’s reviewed by around 13k users and has a rating of 4.6/5 stars.

Good notes 5 is a perfect app for people who depend on iPads to take notes aggressively. The app provides features competitors don’t, like notebooks, infinite nested folders, customizable tools, and mainstream features like handwriting recognition and a favorites tab.

The only part needed is audio recording and syncing, which is missing. Though using text recognition is a bit awkward and laborious. The app has been reviewed by more than 45k users and has a rating of 4.8/5 stars. 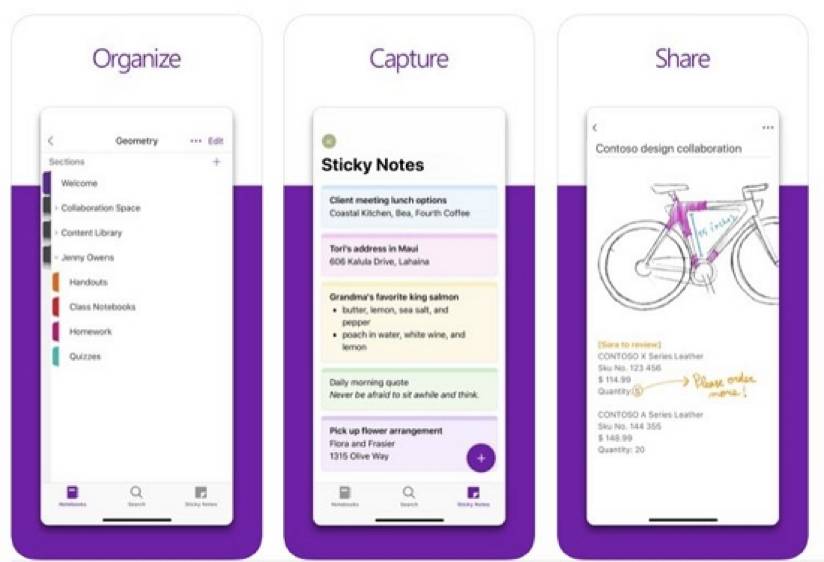 One of the most popular note-taking apps among professionals and organizations. Even though the app is more typed notes centered, the handwriting component is just as good as the others. It also provides customization tools and storage integration with OneDrive, Word, Excel, etc. It has around 700k reviews and a rating of 4.7 stars.

Also known as Google Keep, it is a note-taking app powered by Google’s web-based doc editors suite. The app provides many features, including a voice recorder, voice-to-text converter, customization of text, typed and handwritten notes, image and document importing, etc. The app has around 4.2k reviews with a rating of 3.5 stars. 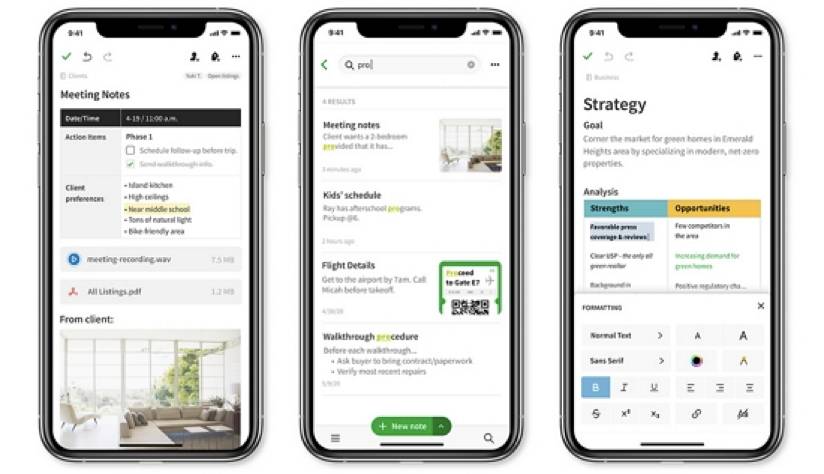 Evernote allows you to create many notebooks, tasks, checklists, etc. You can add illustrations, texts, audio and video files, documents, etc. It also has a text-to-speech transcribing and scanning of documents with the camera.

Evernote also has a cloud syncing feature. However, the app has relatively expensive in-app purchases of all additional features. With 40.7k reviews, the app has a rating of 4.4 stars.

ZoomNotes, as the name suggests, offers the best zoom range, making it practically infinite. It also allows you to create a Page within a page, like a sticky note.

The features include audio recording, unlimited page size and styles, bookmarks, customizable pen types, colors, and cloud syncing. Though the UI is a bit awkward, the free version is minimal. The app is rated 4.8/5 stars. 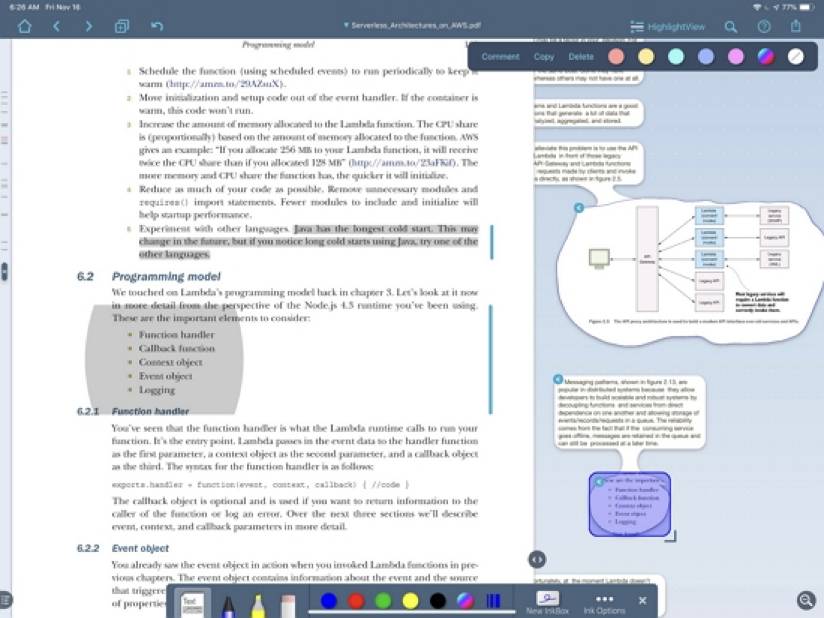 LiquidText is more of a study and research tool than a note-taking/making app. It provides an infinite workspace besides your uploaded PDFs, the ability to add more than docs to a single workspace, expand and squeeze documents, and import web pages as PDFs. LiquidText has a rating of 4.6/5 stars with 4.1k reviews.

Notepad+ is made for creating unique and exciting notes. Some notable features include blurring, drag and drop images, and customization from the font, color, icons, and emojis. The handwriting recognition is also great, and the UI is straightforward. Still, the app is significantly costlier compared to others and is limited to iPad OS only. Notepad+ has a rating of 4.6 stars with 6.2k+ reviews.

Also Read: 4 Best Apps To Put Pictures Side by Side on Android

MarginNote 3 is another research-focused app. Like LiquidText, this research tool opens your document into a digital workspace where you can make/take notes.

But, where LiquidText focuses more on handwritten notes, MarginNote also allows clipping notes, flashcards, mindmaps, etc., along with everything LiquidText does. Though, the app’s free version is reader-only. It has around 3.7k reviews with a 4.7star rating.

Nebo tries to make a difference by merging the “handwritten” and typed noting methods. Unlike the other apps, Nebo continuously converts your handwriting into text form.

It has the best text recognition and math conversion. In the free version, you’ll get just a limited number of notebooks, whereas the premium one offers a dictionary, conversion of PDFs, sharing notes, etc. It has 4.6 stars with around 12k reviews. 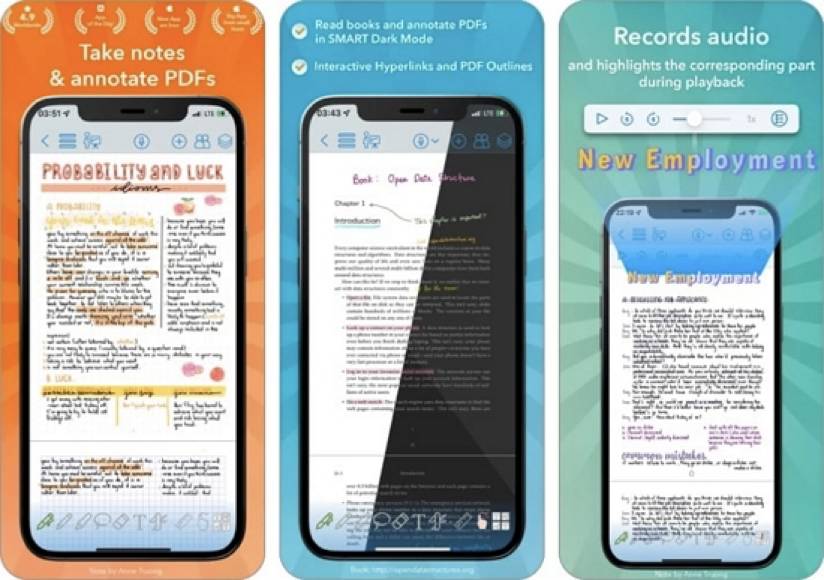 CollaNote is a powerful note-taking app that has a robust note-taking toolkit and customization. The app also makes importing PDFs, images, and other documents faster and easier than most.

While you can use a collaboration feature with other users on a single note, the app is exclusive to iPadOS only. The app currently has a rating of 4.9 stars with +5.7k reviews. 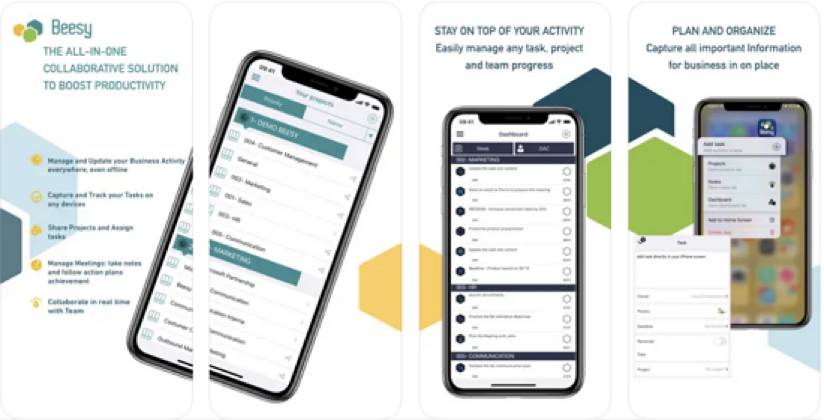 Beesy is a work and business-centered app that is miraculous at planning and organizing. Various features like integrated to-do manager, importing audio, photos, GPS data, etc. The only downside is the complex UI and several expensive in-app purchases. The app has just 52 reviews with a 4.4-star rating.

Noteshelf lies somewhere between GoodNotes and Notability. It has all the necessary tools to take notes. It has a very straightforward Interface with easy navigation and many customization features from templates to pen types and styles. It also allows audio recording. It still has some issues regarding resizing, moving notes, etc. The app also lacks a free version. 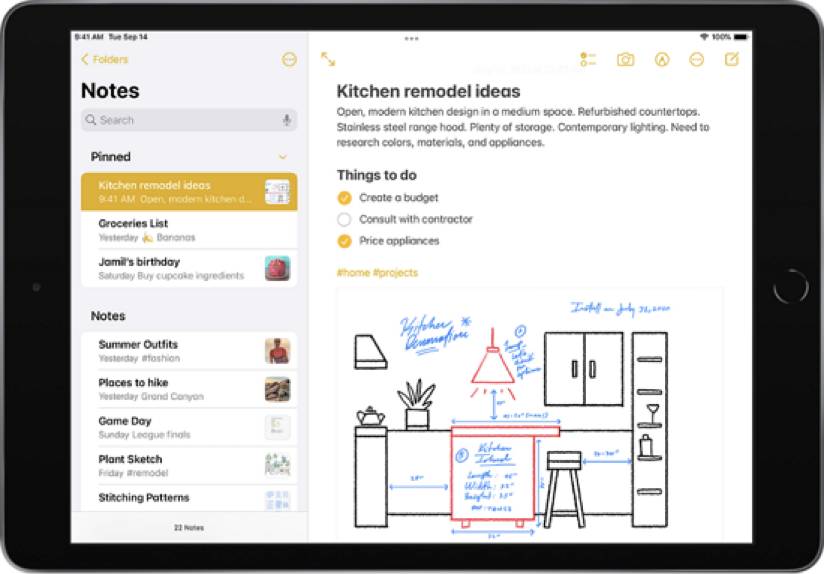 Apple Notes is the oldest of the bunch. The oldest running and used app have many features that keep it usable. But, many features that others include by default, this app doesn’t. These include abilities to import documents, audio recording, templates, flexibility with text and customization, etc. The app has a rating of just 3.6 stars and 1.1k reviews.

With this, we would like to conclude the list of the 15 best iPad notes taking apps. I hope this article helped find you the best app for note-taking purposes, whether professional or not.