Are you tired of scrolling through your feed and seeing the same boring content? Spice things up with a fake Twitter post! These 9 free fake Twitter post generator websites allow you to easily create hilarious or thought-provoking tweets with custom text, images, and user names.

Whether you’re looking to have a little fun or boost your social media marketing strategy, these tools have you covered.

There are people posting screenshots of tweets to various websites for social networking. Specific tools allow you to create these fake tweets using images.

They allow you to create fake tweets by including an image of the profile picture for the individual, then tweeting the content, and even responding to the tweet if you’d like. Many people use these tools to create controversial tweets on social media.

There are numerous fake tools for tweeting. However, the majority are outdated. If you’re using old fake Twitter generators, the tweets will not appear genuine. A convincing faux conversation can be made without prior design or programming experience.

To accomplish this, firstly, you must have creative ideas, and secondly, you need a reliable fake tweet generator. This article will talk about the 9 best free fake Twitter post generator websites. Please make sure that you read this article till the end.

Here are some tweet generators that will help you to create fake Twitter posts. They are free to use, and they don’t even require to be downloaded. Just go to their websites and create unique fake tweets. 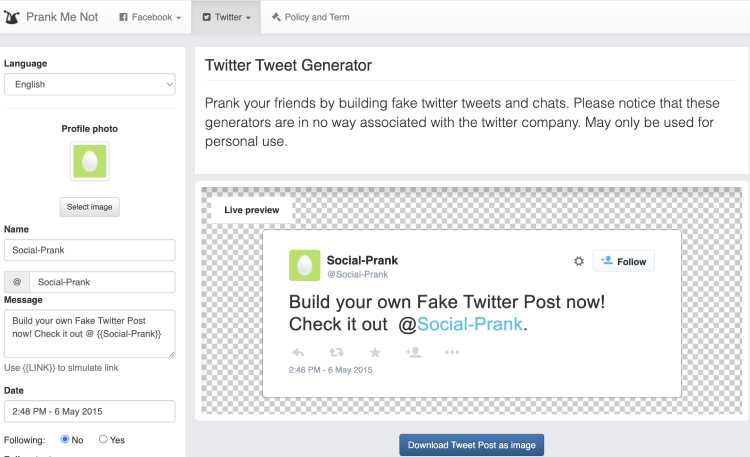 It operates as a fake Twitter generator, i.e., it fills with the details of fake tweets and simultaneously displays the preview.

Then you can download the fake tweet by clicking “Download Tweet as image.” If you are looking for something other than English, Prank me not offers you a variety of language options, including English, Arabic, Polski, Greek, Portuguese, Russian, Deutsch, and many more. 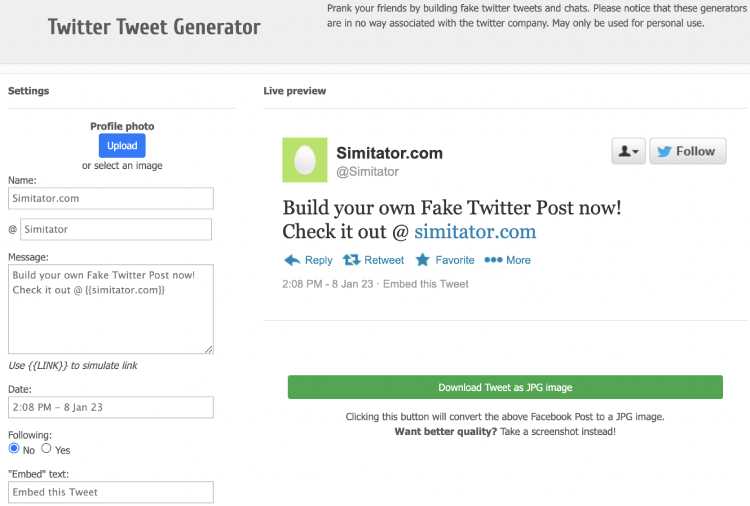 It’s a fake tweet generator site that creates fake tweets. Not only messages but even Facebook postings. This tool is simple; you need to enter the specifics of the tweet’s message, and it’ll automatically generate fake tweets.

It is beneficial because you can view it simultaneously to find your errors and fix them before downloading. It is possible to download it later in a JPG format.

After you have completed this, you may need to be able to download the picture by using the menu in your browser. Discover About these sites that were created to create fake news stories.

Zeoob is a fake tweet generator online tool that can be used for Twitter, Snapchat, Instagram, or Facebook. Funny prank messages, statuses, or even chats can be created with the help of this site.

It’s also a simple-to-use tool by filling in the required information using the edit option on the preview of the post.

The fake tweet is directly downloaded by taking a screenshot or clicking the “Save Your Tweet” button. It’s a lot more user-friendly than the other fake twitter generator websites. 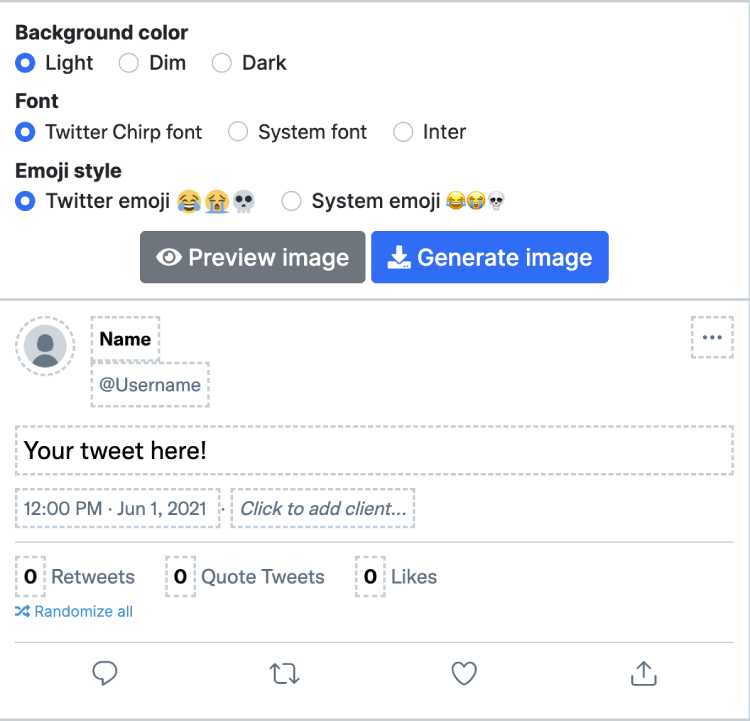 With this fake Twitter maker, you can generate fake tweets, account suspension messages, and account-blocked messages. It has been updated to match Twitter’s new design, making it difficult to recognize the fake tweet.

The generator can choose the theme (Light, Dim, and Dark) when creating fake tweets. Then, you need to upload the profile photo. It is possible to upload the picture in either JPG or PNG. Then, type in the username and Twitter handle. You can utilize numbers, letters, and underscores for the Twitter handle.

After that, you can enter the content in your tweet. Then, you can select the date and time for the tweet. For the number of people who like and retweet, you can choose any number you wish or hit the ‘Randomize’ button, and every random number is added automatically to the tweet.

Finally, you can type in the device’s name, such as ‘Twitter app for iPhone, “Twitter Web Application,” or “Twitter for Android.’ Save the image once you have completed all the information, and then upload it to all your social media. 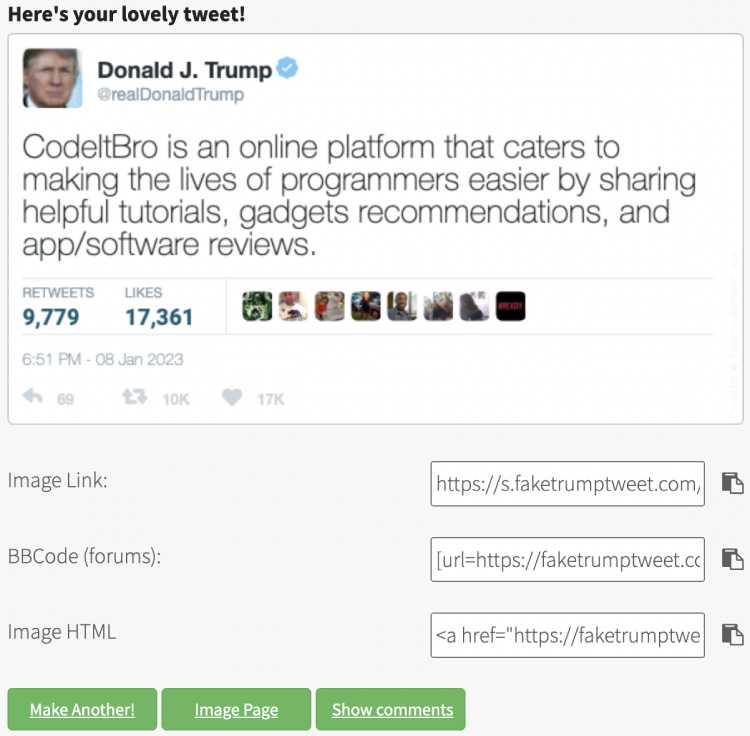 Amid all other Fake Tweet Generators, Fake Trump Tweet is trustworthy. With this fantastic program and its friendly user interface, you can convey your story using only a few words on Twitter.

Once you have visited this site, you can make fake tweets easily with reliability and stability. This makes it among the top fake tweet makers on the market.

It is easy to navigate through various pages to search for a Tweet generator since this app performs the job. Input your text into the text box, and you are ready to go. 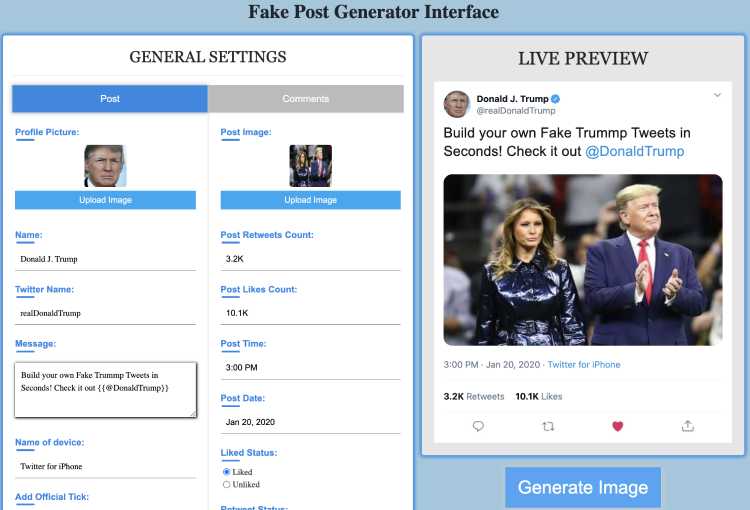 This is an excellent fake tweet generator tool online to make fake screenshots of tweets. You can input your name, profile picture, time, tweet information, verification badges such as like or retweet count, and the name of your device that you want to add to the tweet.

When you’re finished, Click Generate Image, which will save the tweet’s image and the content you’ve added. The screenshot appears natural, and most people will believe it’s an actual tweet. 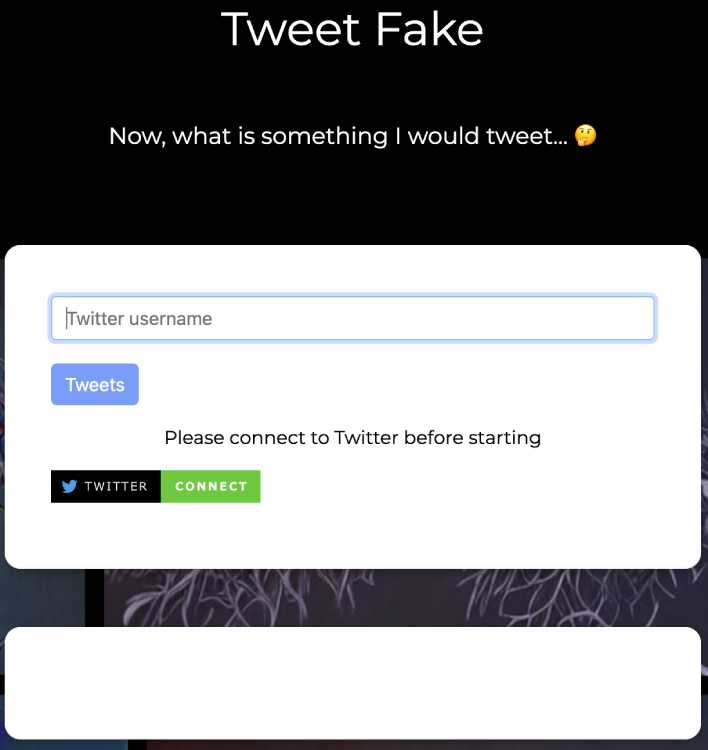 It’s another fake Twitter generator site that allows you to make fake tweets free posts. You can customize the fake tweet template, select the Twitter person to create a fake profile, and take a picture to save the fake tweet.

You can put your fake Twitter details by using the template you prefer and clicking “Generate Fake Tweet.”

This fake twitter generator site lets you generate fake tweets. The process is as simple as adding the necessary information such as username, user ID messages, date of job image, profile picture, post pictures, number of views, the number of retweets, replies, or hearts count.

And even direct message count. Also, take a screenshot of the fake message created. You’ll need to sign up for a social profile to download it.

Do you have a morse audio file and want to transcribe it into text? If yes, then you have landed on the right page. Here…

Are you looking for some of the best tools to make your PDFs look hand scanned? If yes, you have landed on the right blog,…

Here we have compiled a list of the 10 best AI avatar generator websites. Using these websites, you can automatically generate avatars for your social media…