Here we have compiled a list of 10 best pranking apps to fool your friends. Being a stern person is usually favorable, while a guy with a sense of humor is preferable in a friend circle. And what person with great humor won’t find practical jokes or pranks funny?

Pranks could be a great way to socialize and increase bonding with friends, but only if done correctly. But, it is to be reminded that pranking someone is not a plausible errand, but is of a petty nature, a concept made for killing boredom.

Below is a list of the 10 most used apps for pranking others, curated personally by keeping many of the utilities of these apps and their ability to work for pranksters.

Who’s calling? Well, it’s for you to decide. Would it be the President? Or a celebrity? Or a Rich business tycoon? In reality, maybe it’s customer service or your mom. But the “who’s calling Fake Caller Prank Phone Calls” app lets you decide from the above and anyone from your imagination.

The app has about a hundred different ring tones and nine different call screens for you to choose from. It lets you schedule a timed phone call from your influential friends and prank your friends. Or you could use it to avoid awkward and unwanted social interaction with your “not so favourite” people. 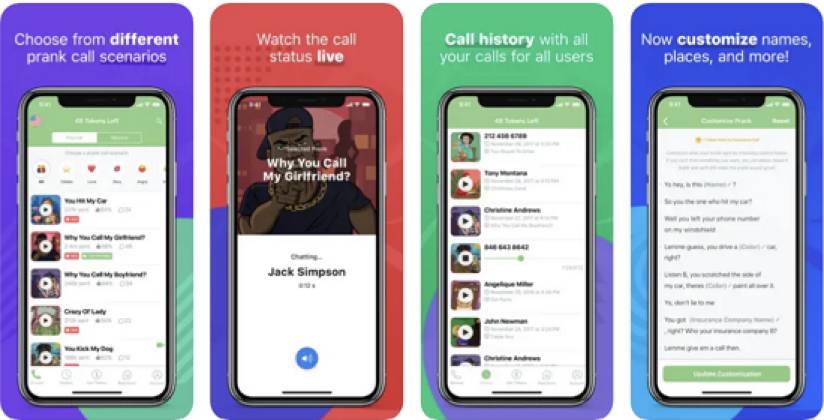 The prank calls are a universal favorite, Except for the ones receiving them. And been going on for generations now, and we have sir Edison to be thanked for this.

But, with smartphones in existence, prank calling someone is a fool’s errand, except, of course, unless you use apps like Prankdial. The app has hundreds of wacky calls available for you to choose from, and the app will do all the hard work for you.

Choose a prank from the available options and enter some information. The app will call them and sound like an authentic voice. The app listens to them and can understand when it should respond with the following prompt on the script.

You get three free prank calls per day. But, if you do all the prankster stuff yourself, you can get extra credits. 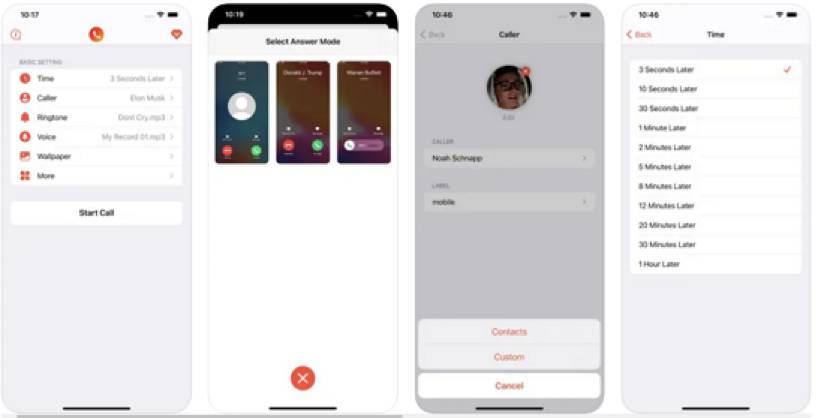 Fake call – prank work similarly to the first one on the list, “who’s calling fake caller prank phone calls.” The app is made to stimulate fake incoming calls. All you need to do is set the caller’s name and number, choose the caller’s picture, etc.

The app allows you to set a ringtone or go with the default one. After that, you have to set a voice and record the voice of the fake caller. Usually, it would be better to ask a friend to do so, but why not? 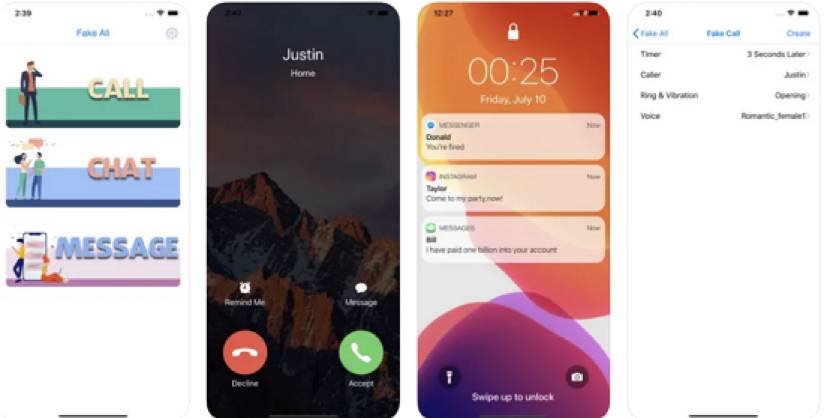 Fake All allows you the “privilege” to recreate text conversations and phone calls. Many folks now prefer texting over straining voice calls. With Fake All, you can create entirely fictional conversations, Edit and refine sections of the entire chat to your imagination and perfection.

Along with all this, you can even type on a text and set it to receive at a scheduled time. You will then receive an alert with the correct icon of iMessage, Facebook, Instagram Messenger, WhatsApp, etc. You can use this app to impress your friends or fool them by texting someone they know. 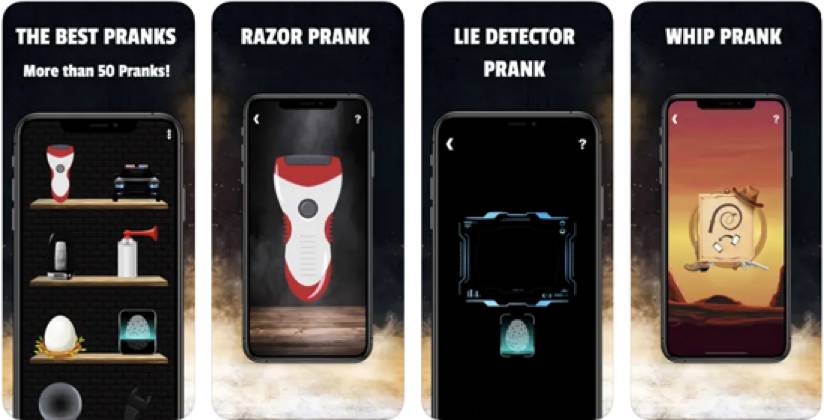 The all-in-one solution for all of the prankster’s needs. With around a dozen pranks available in the app with more unlockable through the shop. The list stretches with apps that force decisions, soundboard-based ones with sounds of razors, whips, or even of ghosts and animals to scare your friends.

Sound-based apps are common among pranksters but could produce astounding results. You can make someone think there’s a police raid in the neighborhood, or you’ve shaved their head or brows with a razor when they’re distracted by something else. The app could be the best one for dabbling pranksters. 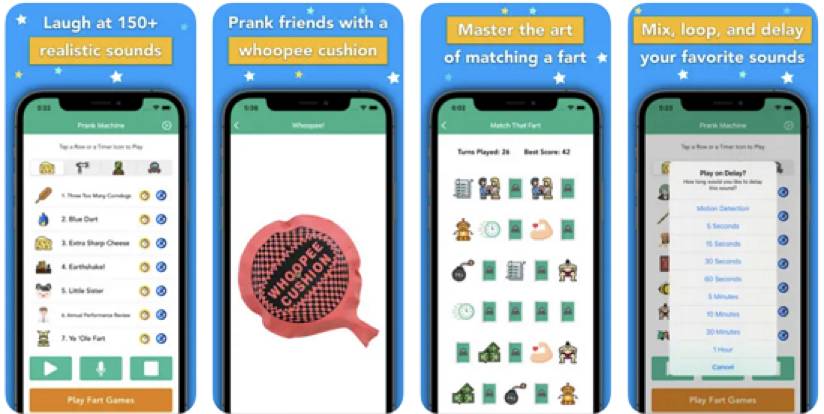 After all, why not? Why not Make one of the most embarrassing moments one can go through a great prank idea? Fart Sounds & Annoying Noises is another soundboard-based app with mastery at Fart noises.

Uncomfortable as it gets, the nomenclature goes beyond the realm of awkwardness, with sounds named “grandma’s Casserole,” “Three Too Many CornDogs,” and “Loud and Proud.”

The app has many features ensuring you a sure kill. These include tapping and playing the audio, setting the timing for the noise to go off, and using motion detection. The motion detection uses the gyroscope/accelerometer in your phone and plays the audio when someone moves it or picks it up. It can also use an apple watch to prank someone from a distance. 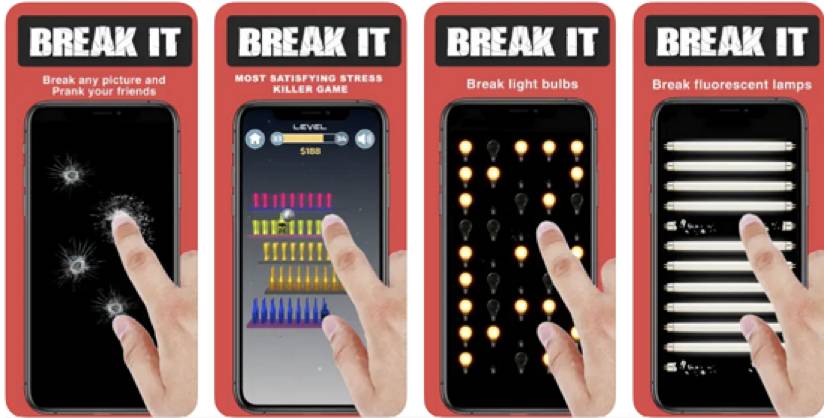 Does the idea of breaking things scare your friends? Crack & Break It is a soundboard-style app loaded with different types of glass breaking and cracking sounds. The app provides you with tons of things to break.

Just tap on the object you want to break, and it plays a realistic sound. The app has already broken it, be it glass, bulb, bottle, or anything you can lay your eyes on. Instead of helping you be a prankster, one can also use it to get out of an awkward moment or a call.

Voice Changer is a Simple, free-to-use app that modifies your voice. Simple as it sounds, the app is used to record and edit your voice, making it more masculine(lower pitch) or feminine(higher pitch), changing the speed, or even making it sound like a robot.

This is the app’s sole purpose and has little to do with pranking people. But a dab-hand prankster could use it for phenomenon pranks. One can change their voice and record something that would be used as a showoff of a specific something. 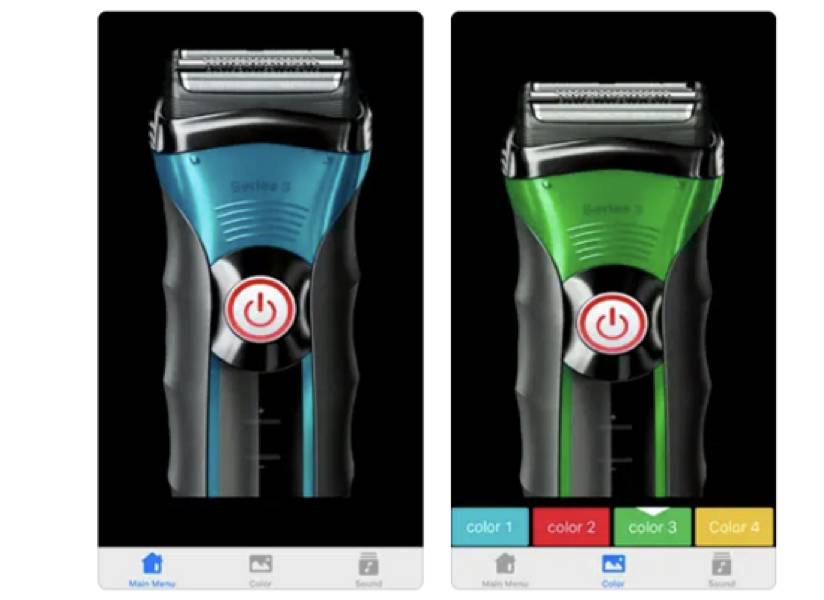 The love of hair can be severe sometimes; trimming them could be a nightmare. But, a partially shaved head would usually be a more embarrassing sight. Use this fear and prank others with this app.

You could use an actual trimmer, but it wouldn’t be humane, so sticking with the app is a more intelligent move. The app makes your phone vibrate and plays the trimmer noise audio. It also displays a picture of a trimmer, so it would surprise one if he’s inattentive. 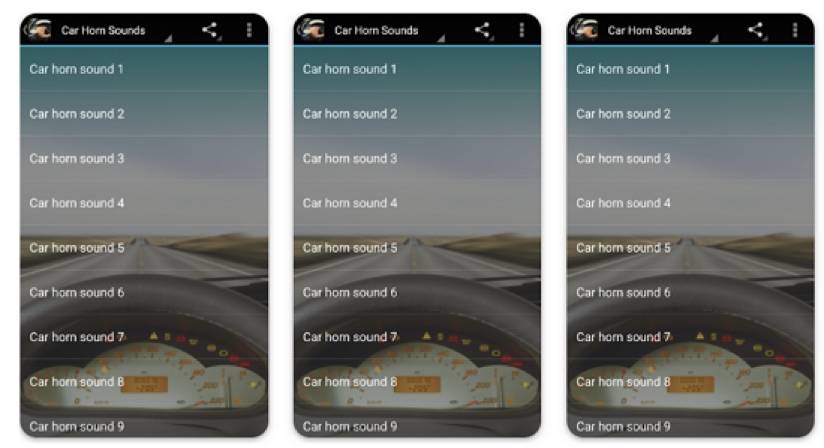 Another soundboard-based prank app on the list is the Car Horn Prank Sounds. As the name suggests, it has various Car Horn Sounds for you to create chaos.

One can use it to surprise someone with a truck’s mighty honk or a vehicle’s beeping used to irritate. One cannot use such an app, but in the hands of a true prankster, this might create some masterpiece, in a good or bad way.

We want to conclude the article by listing the ten best apps you could use to prank your friends and family. We hope this article was helpful to any *veteran* or *novice* prankster searching for new ways and apps to satisfy himself.